Commissioned by the Toronto Sculpture Garden

Below is the text from the exhibition pamphlet:

Mushroom Studio is a site-specific work created for the Toronto Sculpture Garden. Loosely based on the form of the Amanita pantherina mushroom—lesser cousin of the red-capped Amanita muscaria—Mushroom Studio is a fungus-shaped sculpture that contains my studio in its stem. During the length of its installation, this workspace will at times be in use, at others will sit poignantly empty.

Mushroom Studio draws from many references, including California’s “programmatic” buildings, popular during the first half of the twentieth-century, wherein roadside diners and concessions were created in the shape of whimsical figures—restaurants shaped like puppies, creameries in the form of icebergs adorned with polar bears. This tradition continues with large-scale versions of mundane objects created as tourist attractions, including Vegreville, Alberta’s giant Easter egg, or Colborne, Ontario’s Big Apple bakery. Patently whimsical, there is also a melancholy to these structures and their builder’s efforts to create something mystical in their midst, hoping to beguile, amuse, and attract.

Mushrooms are both adored and abhorred: fetishised as delicious consumables and charming imagery, while tinged by their abject qualities as clammy-fleshed, potentially deadly organisms that grow in dark places on rotting matter.

The notion of mushrooms as habitable spaces is a mainstay of fairy tales. In such confabulations, elves or fairies are anthropomorphised elements of the natural world: that which is unseen or unknown is given a form that can be comprehended. In some ways, the contemporary artist occupies a similarly chimera-like social position—both visible and invisible, regarded and disregarded. An artist’s interest in forging a livelihood from their work, and in the case of Mushroom Studio, creating an artwork in which to create more artworks, offers an odd clash of the real and the fanciful.

Mushroom Studio nestles into its surroundings of restaurants, offices, condominiums, and businesses. Its presence proposes an artist’s studio as just another common urban site, while presenting itself in such a ludicrous form that its viability as such is destabilised.

In Roald Dahl’s James and the Giant Peach, the narrative culminates with the protagonist setting up home in NYC’s Central Park, in the pit of the titular giant peach, where he lives out his days surrounded by friends and admirers. By creating a workspace as an artwork, I am making a Moebius-strip cycle of production that proposes pragmatic questions about the usability of art, and the ability of artists to live through their art. 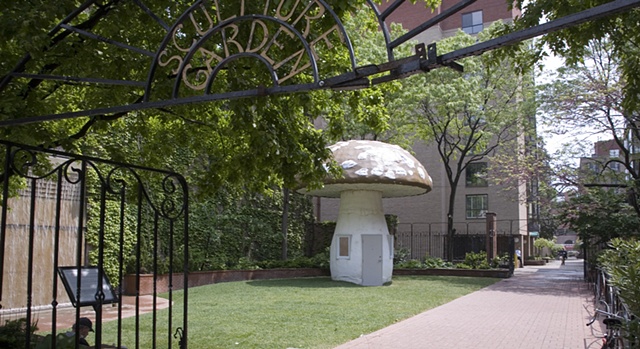